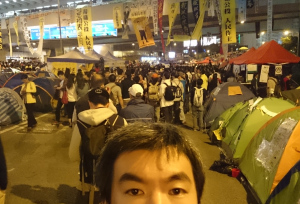 I’ve seen around Hong Kong and Macau.
I have many purposes visiting Hong Kong like sightseeing, shopping etc.
But first of all, I’ like to write about Hong Kong Pro-democracy Protests.

Currently (2014/11/22), I think everything in Hong Kong is normal except very limited exceptions. It is safe. If you don’t anything thoughtless things like violences or breaking something, it is okay.

There is so many photographers, and so many people taking picture with their smartphones. (Sure, I’m one of them.)

There is two large demonstrators groups. One is around Mong Kok Station (旺角駅) at Kowloon. Another one is around Admiralty Station. (金鐘駅) Roads at both of them is blocked with a barricade. Mong-Kok is like an shopping street. Admiralty is the distinct of government offices and large banks. 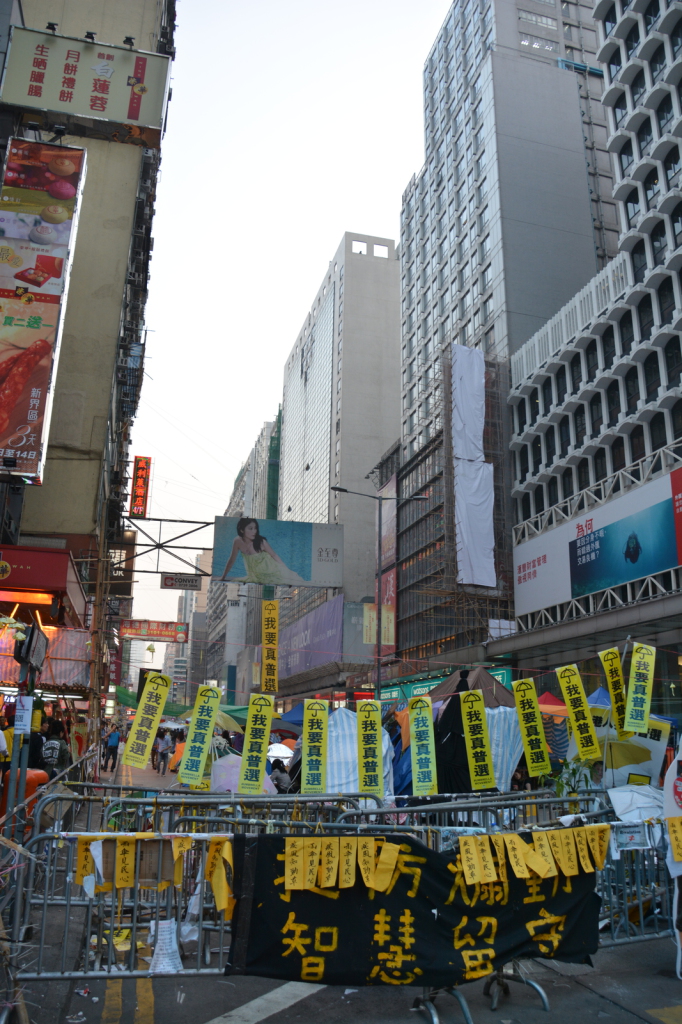 Mong-Kok is located at Kowloon area.

Here is an shopping street. There is many visitors and locals.
Cars were blocked by the barricades, but pedestrians can walk into there. Shops were open.

There is some people speeching, but so few demonstrating people. Here is relatively mild. 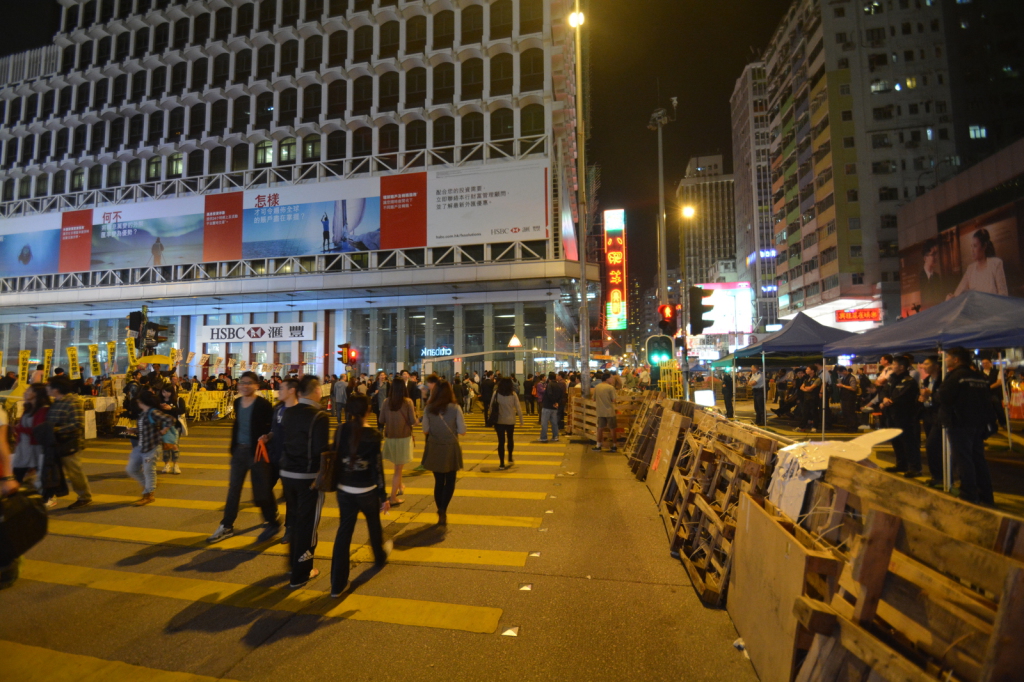 Left back side is the Protester’s Barricade, other side is polices and police’s cars. Pedestrians walks at the middle of them. 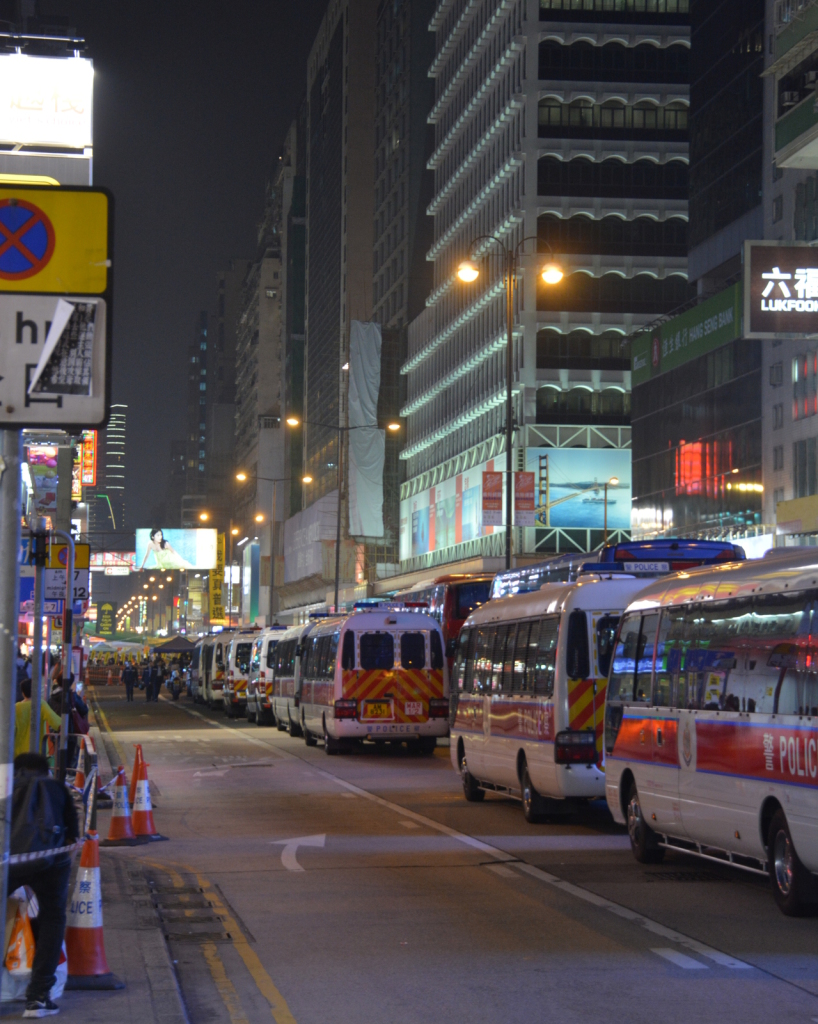 These cars are towards Protester’s Barricade. Many polices in cars. 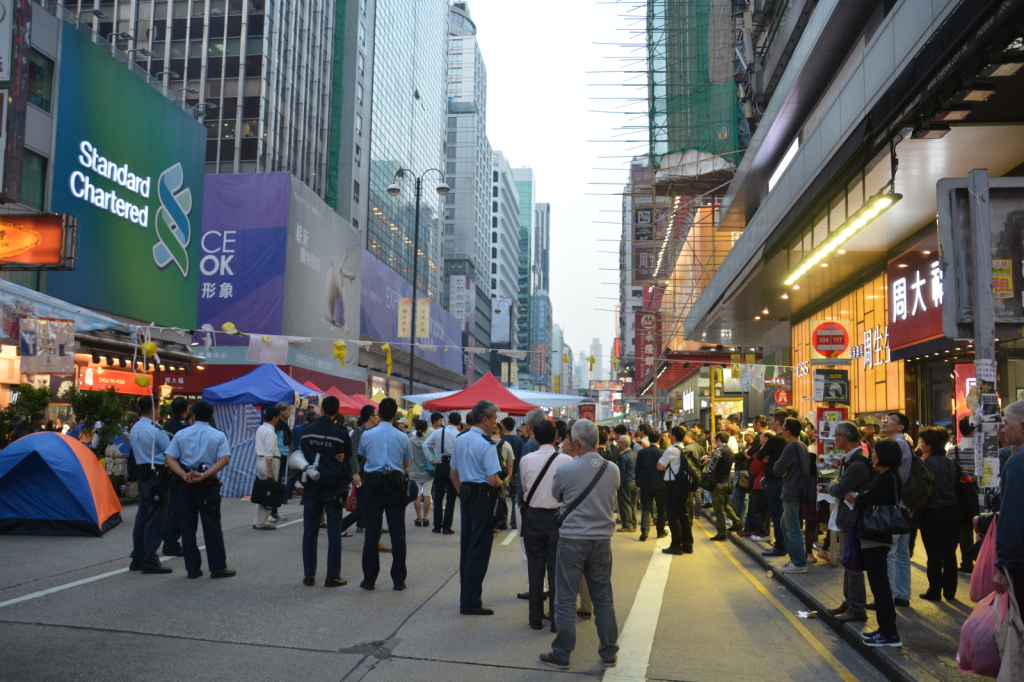 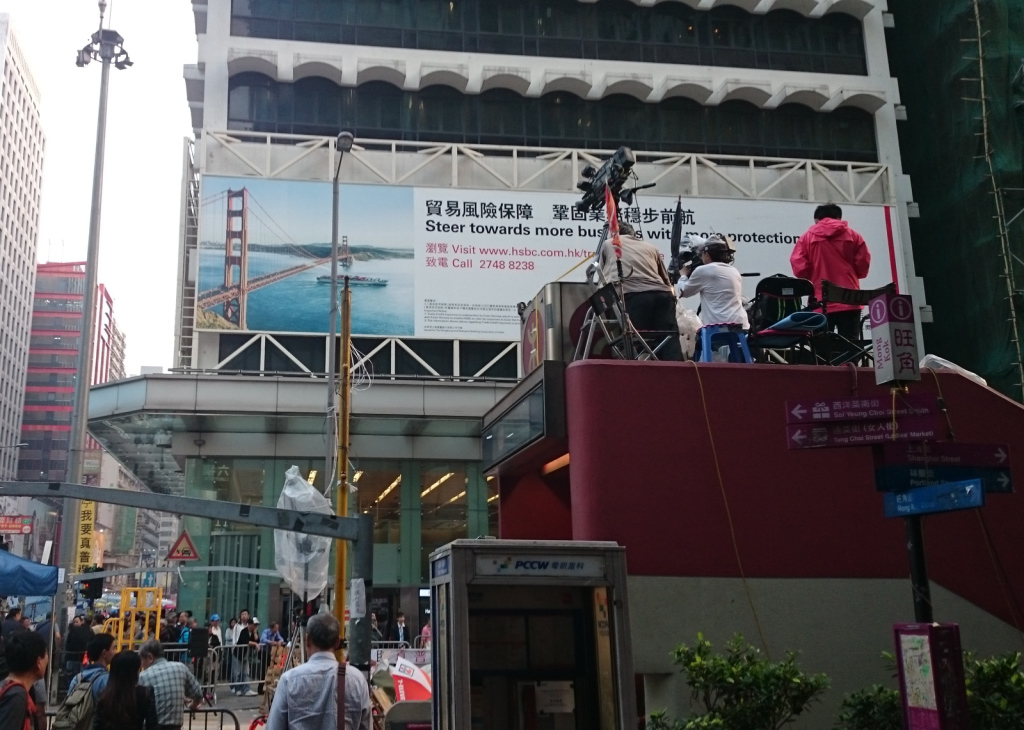 People of the press climbling roof on Station Building

They probably want take good videos anyway. It is normal in here now. 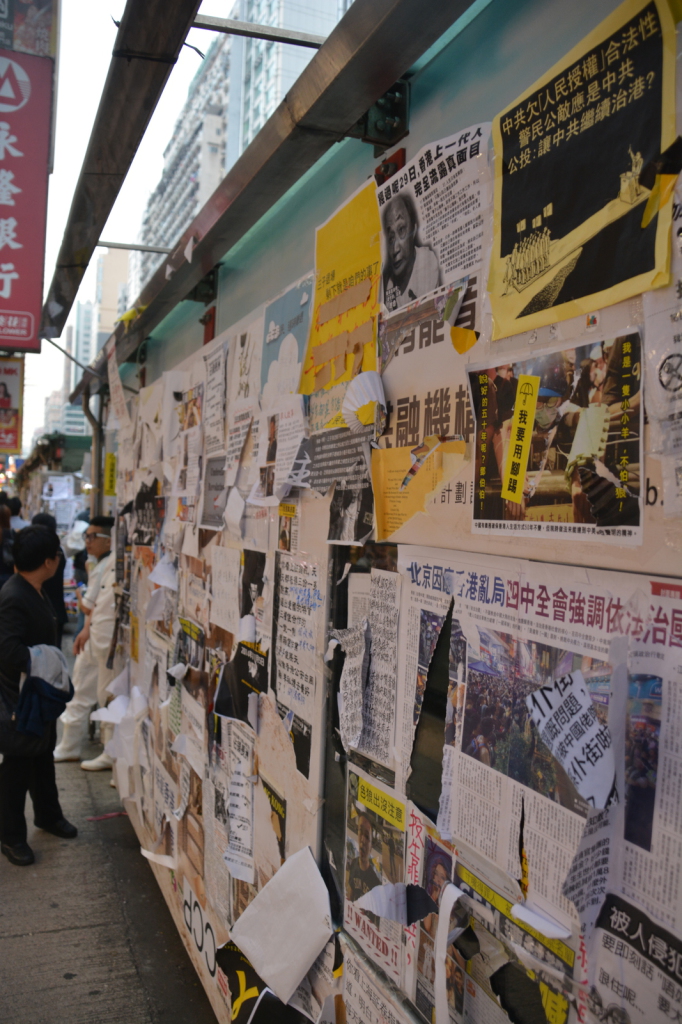 Papers posted in a Bus Stop

There was so many things to protest.
Almost of them are in Chinese Language so I could not read them. But I could read Kanji, so I understood meaning of about half of them. 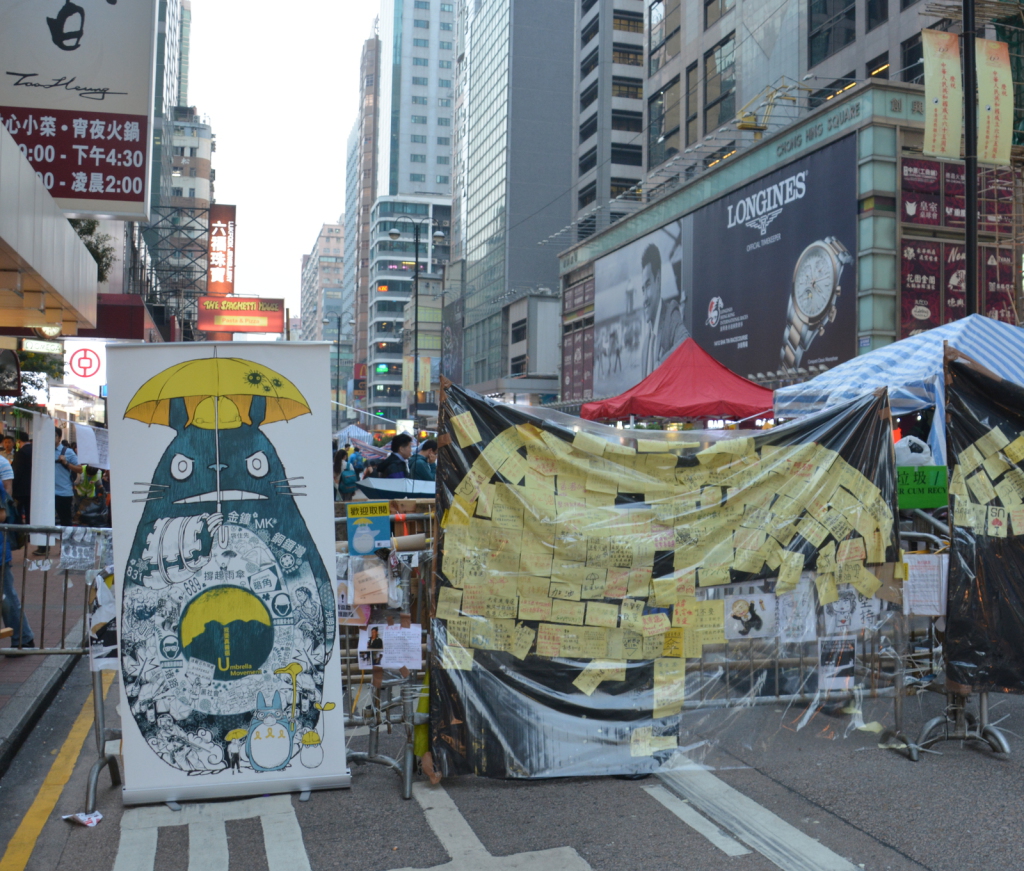 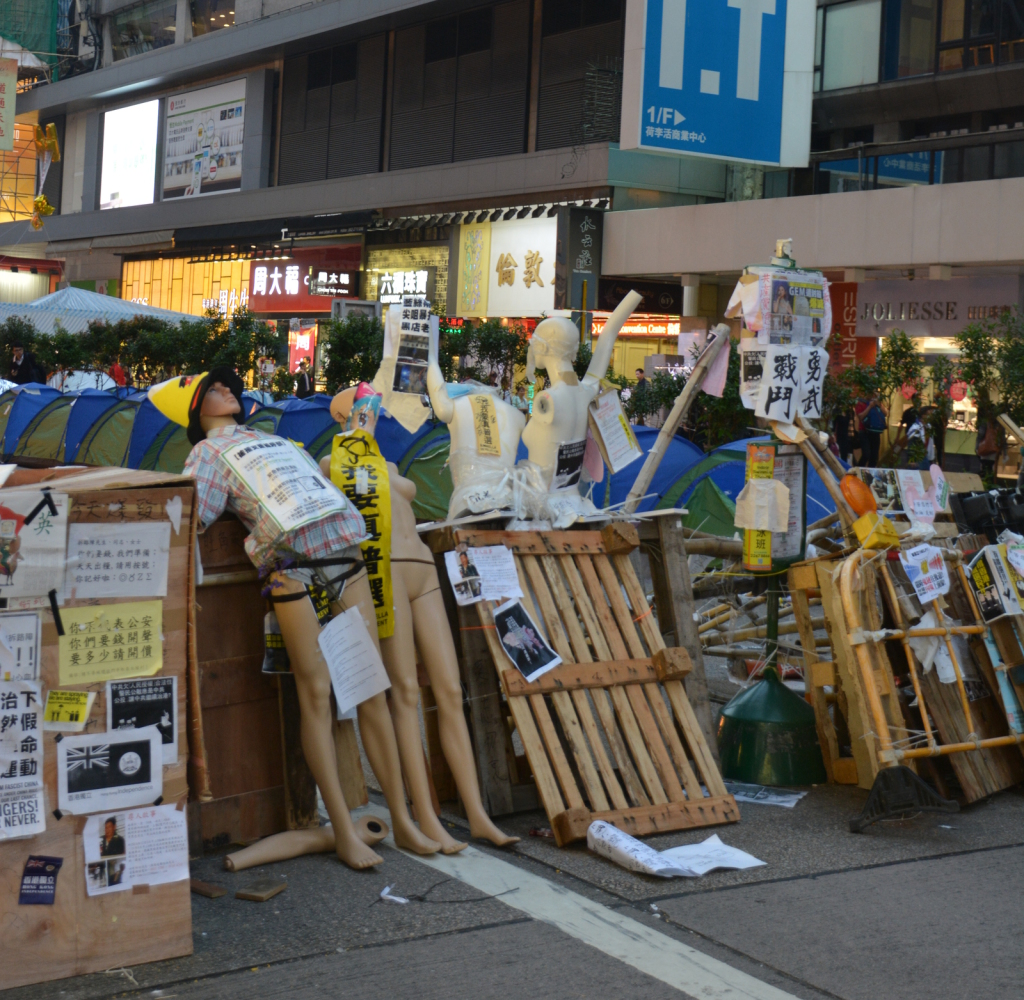 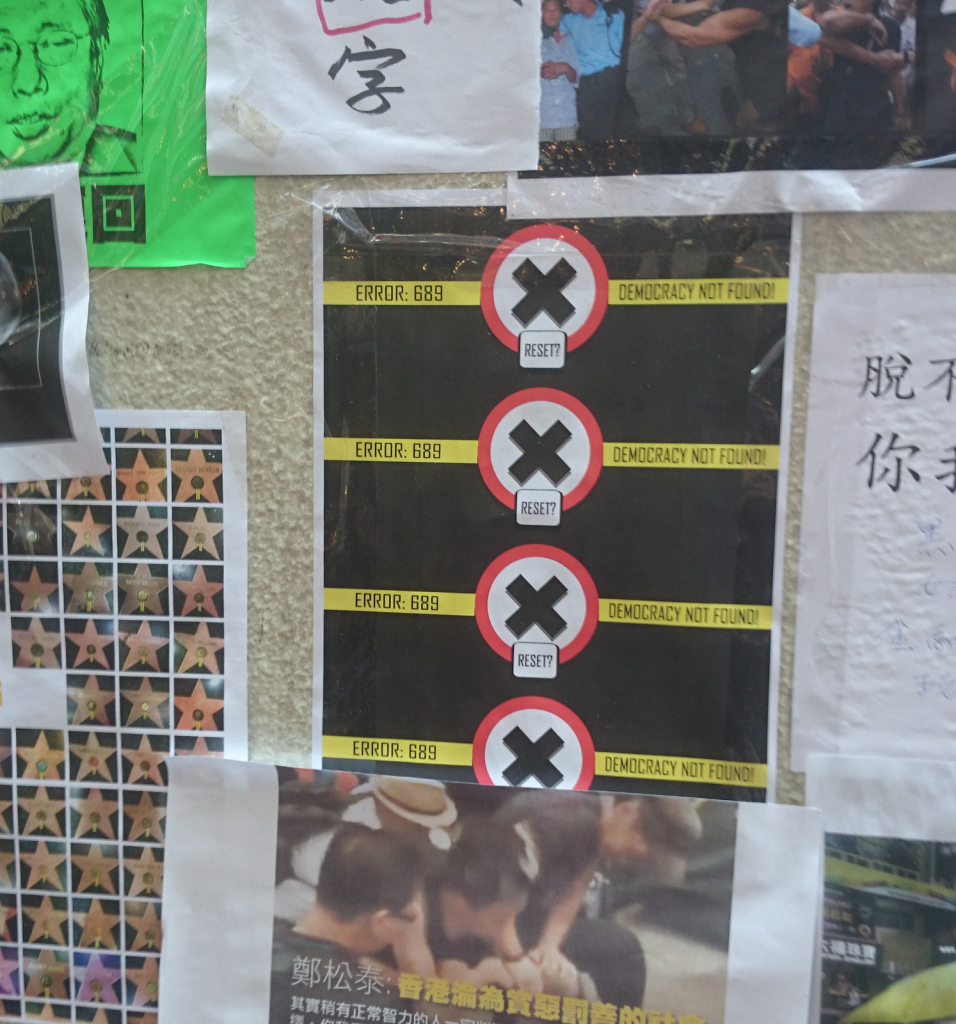 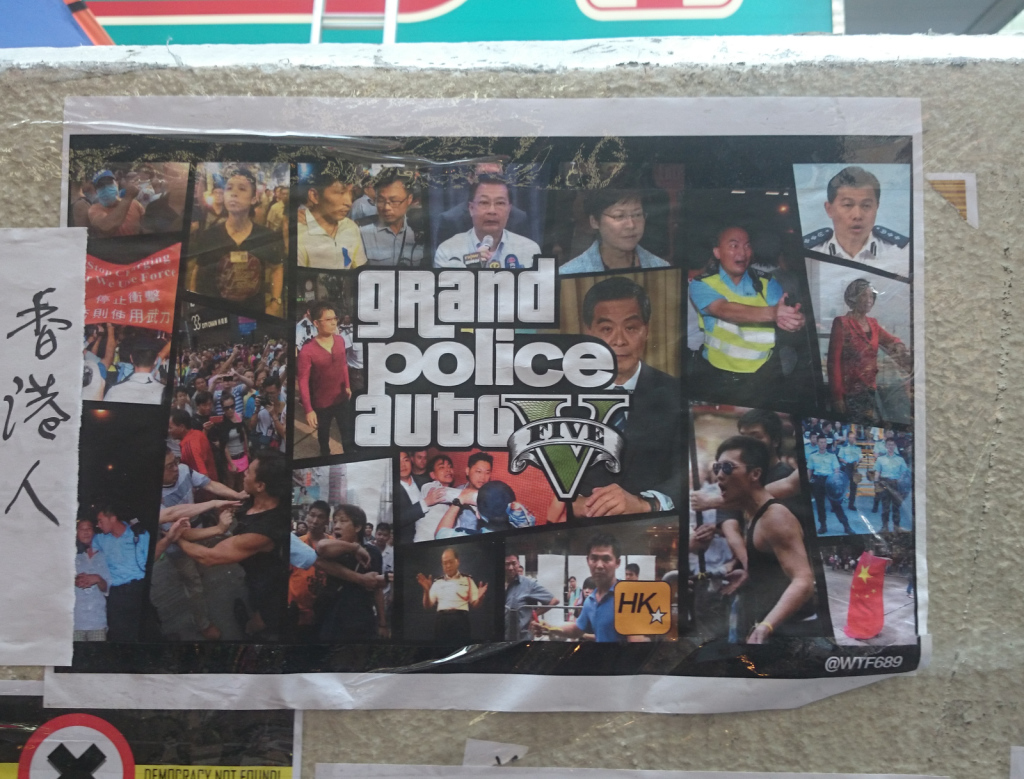 I think they are so creative. It may be result of thinking for observer from outside country. (Or they just kidding.)

Japanese person who says about nuclear power or forign people something should look them. 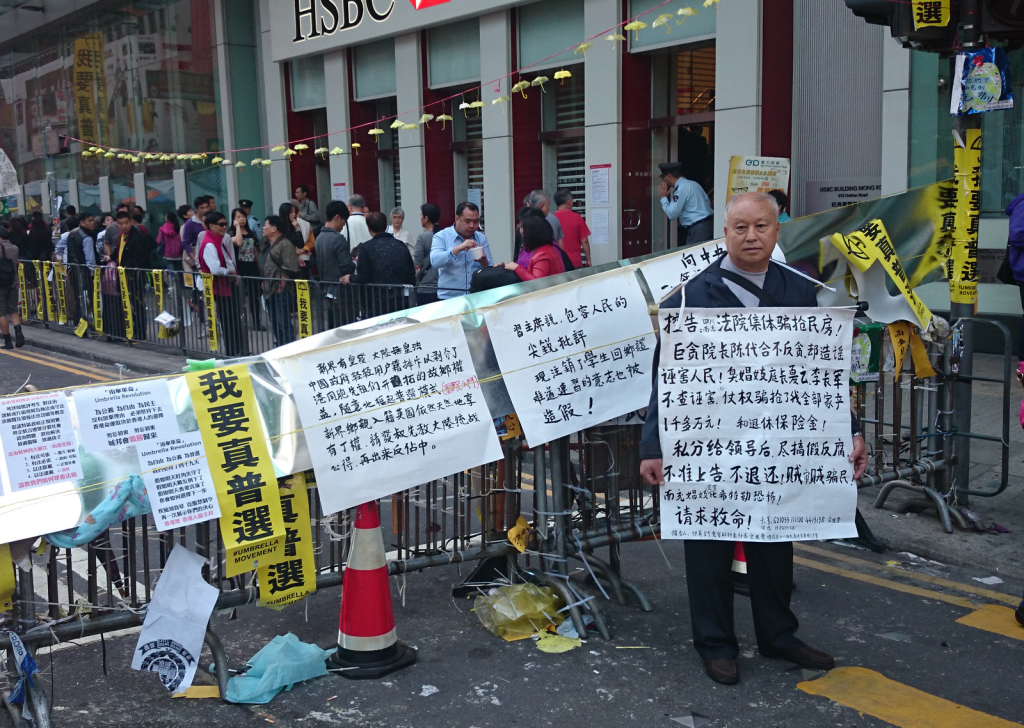 Some people said different thing than main stream protesting. Maybe person in this picture was saying about unfair treatment of a trial. 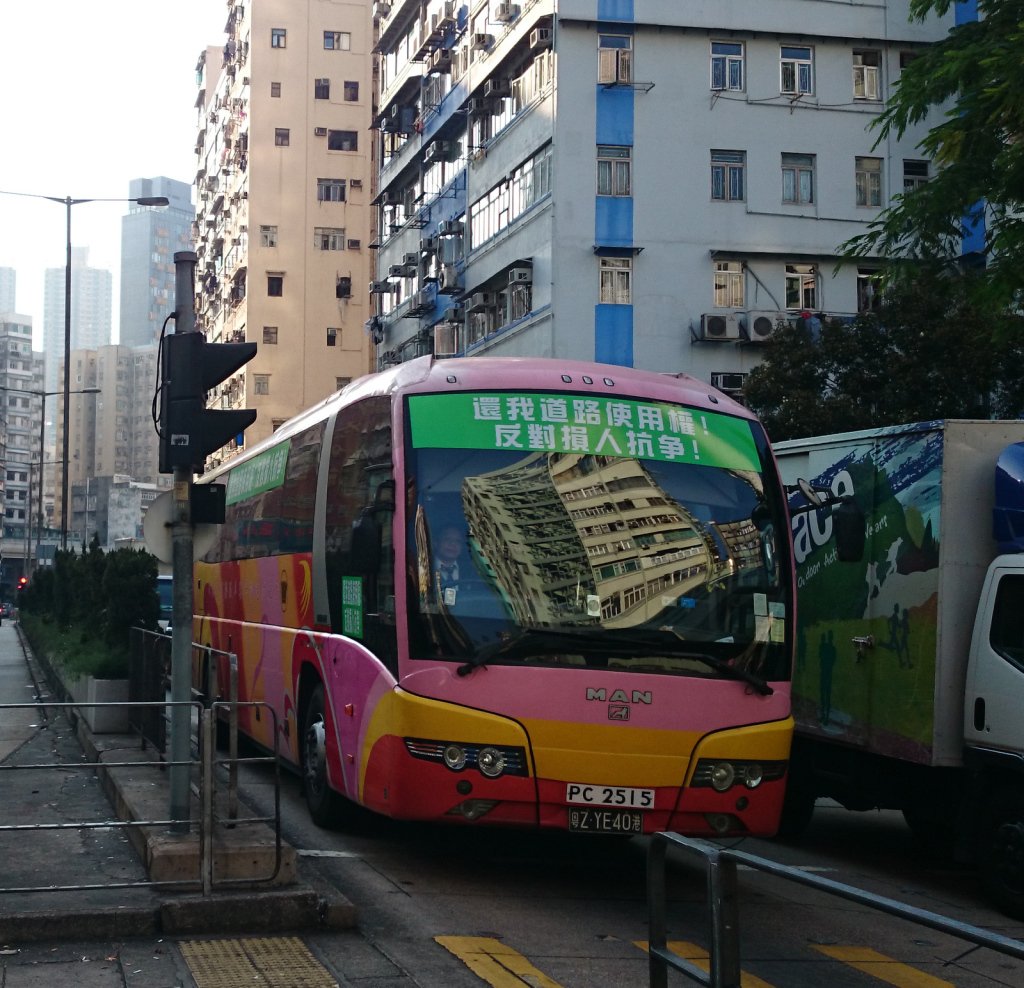 This is easy one to understand for us. Probably this says like “Return a right to use roads! I’m protesting blocking roads!”. (Perhaps misunderstanding…) 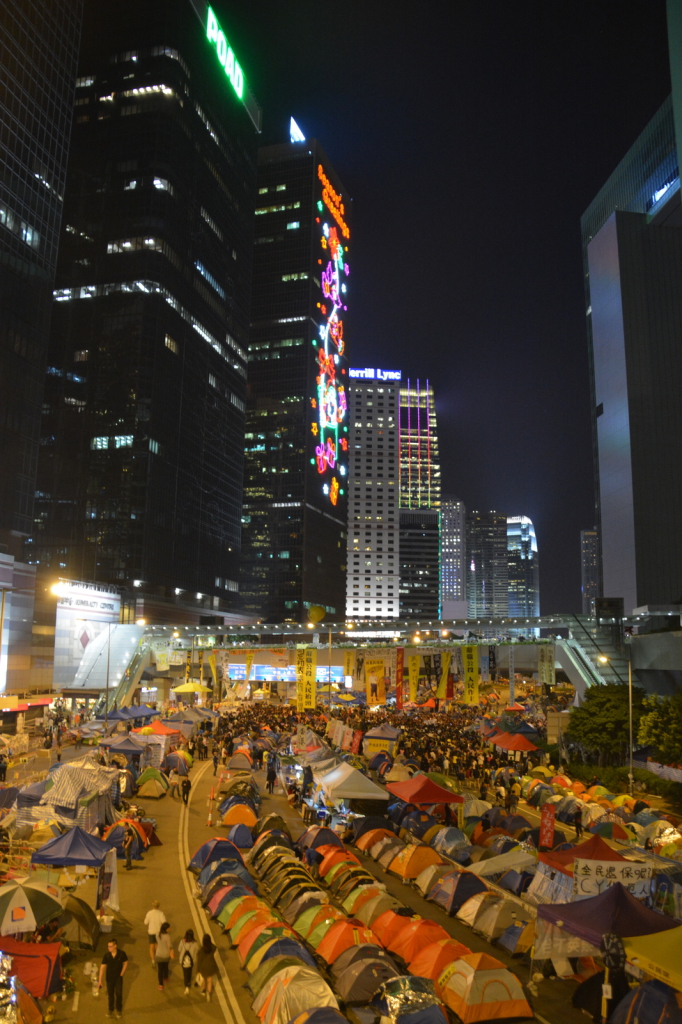 This is Admiralty which has government buildings, and many banks.
It is placed at north of Hong Kong island.

It was in night of friday, there was so many protesters. Some people was speeching central in this group. 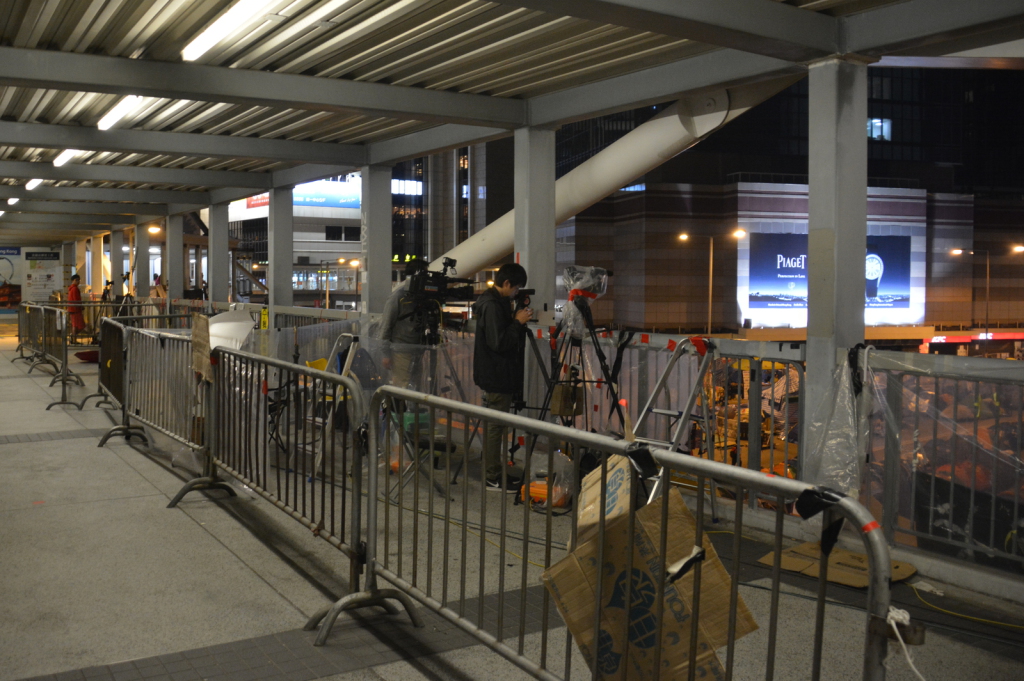 Boothes for The Mass Media

They (protesters) prepare these boothes for the media. 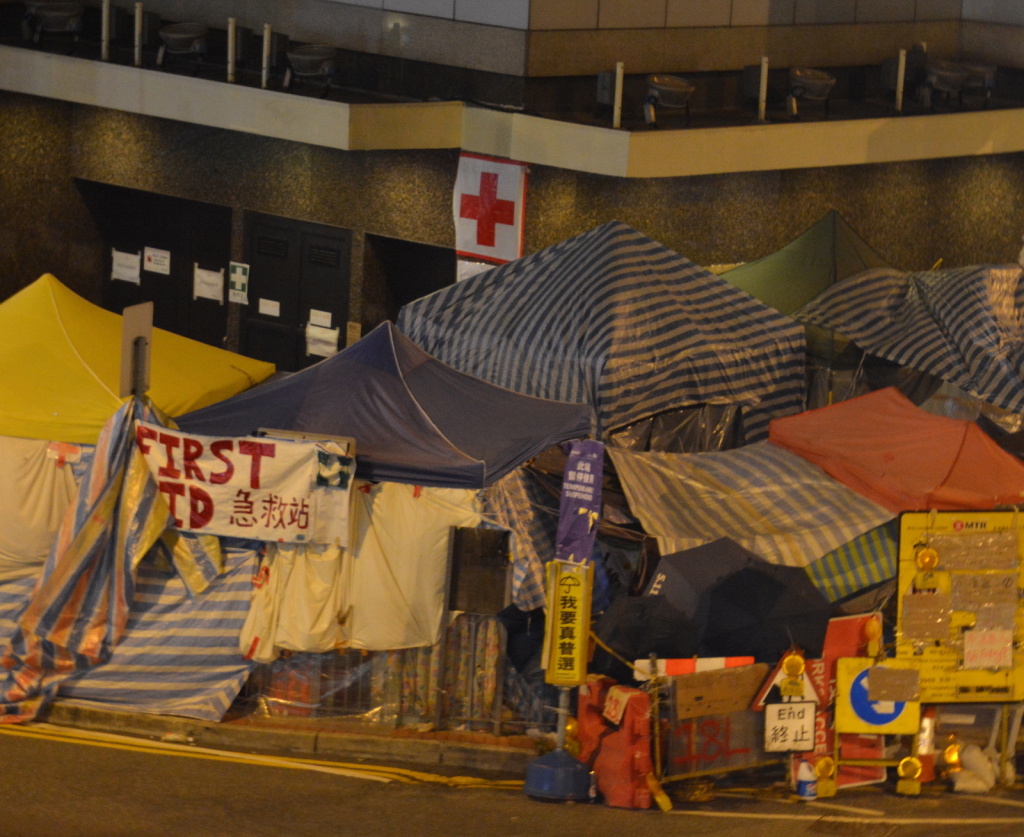 There is some first aid tents. Some person (looks like students) which wears red-cross marked clothes were walking around. 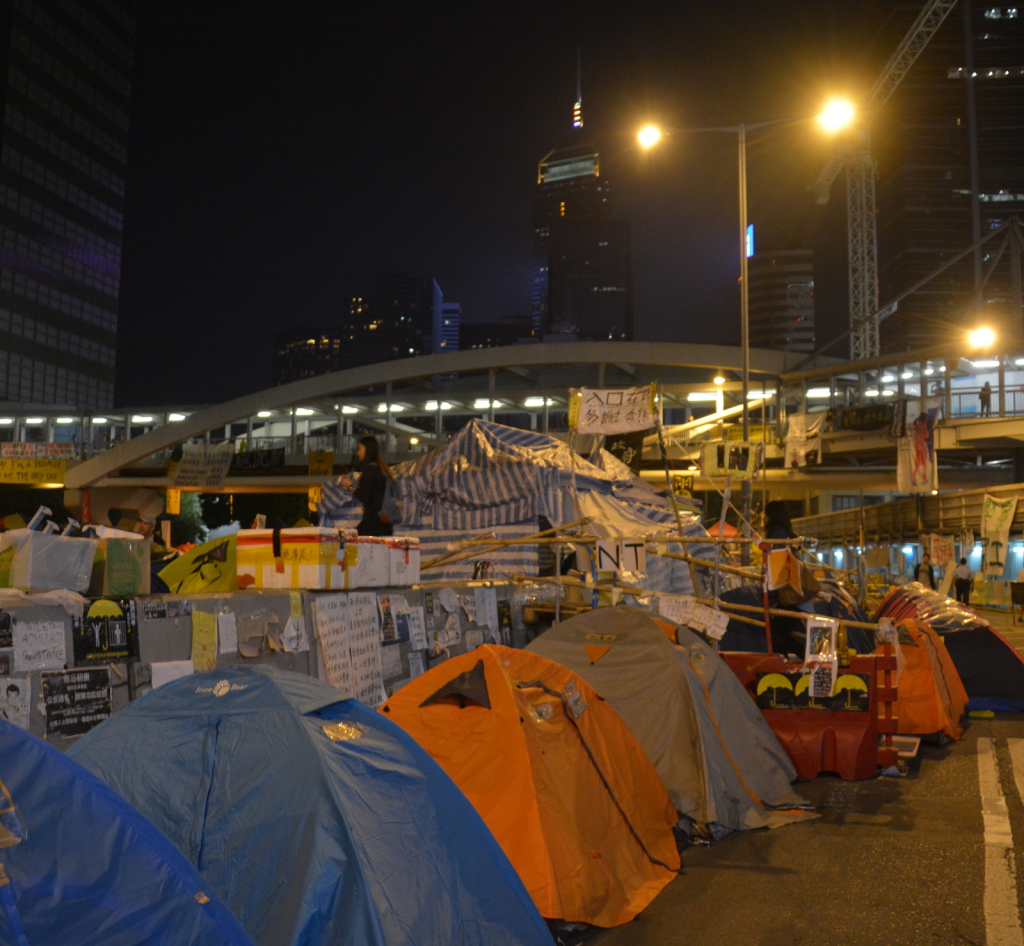 Enter to the Place

They made stairway to enter the protesting place.

They were very thoughtful of safety, and of effectively saying to outside. Many things are made carefully, and thoughtful. It is awesome. 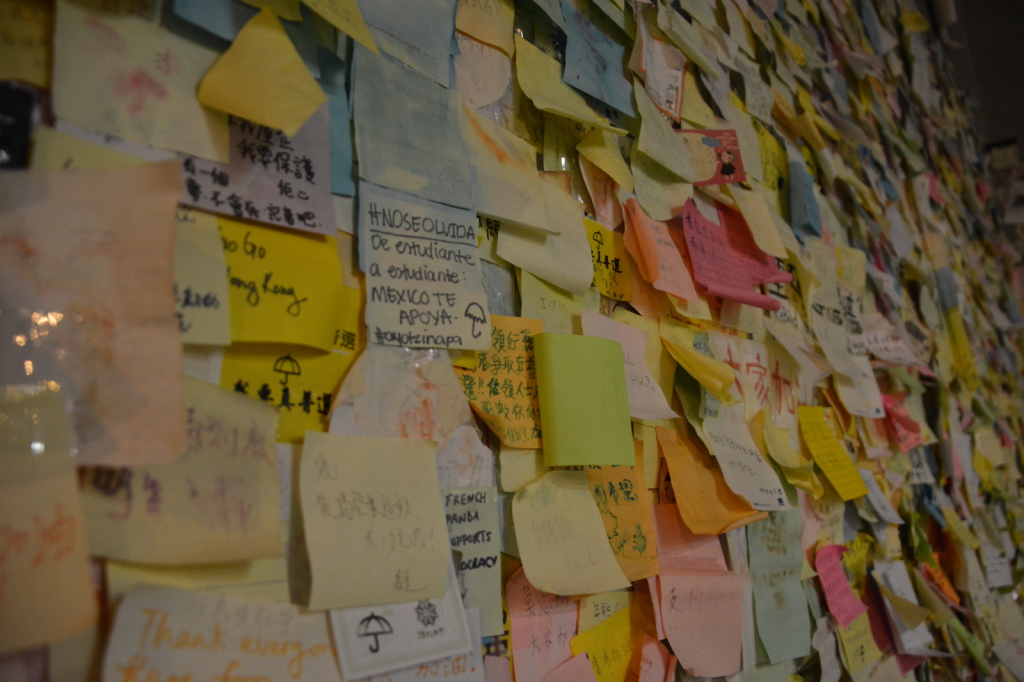 Many messages were putting on this wall. Some of them written English, and Japanese Language. 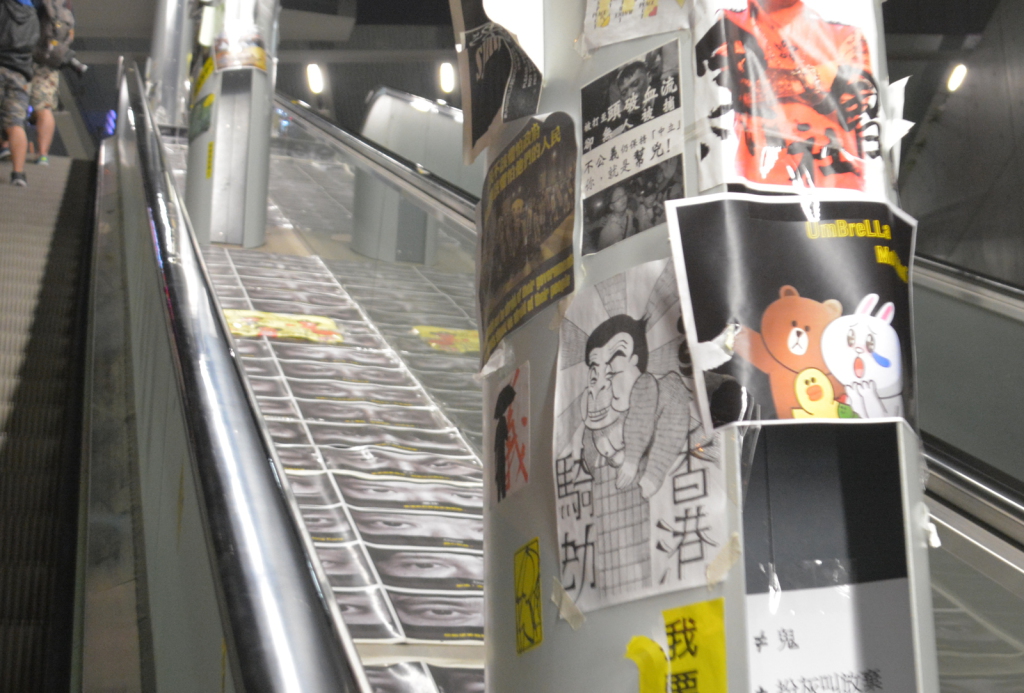 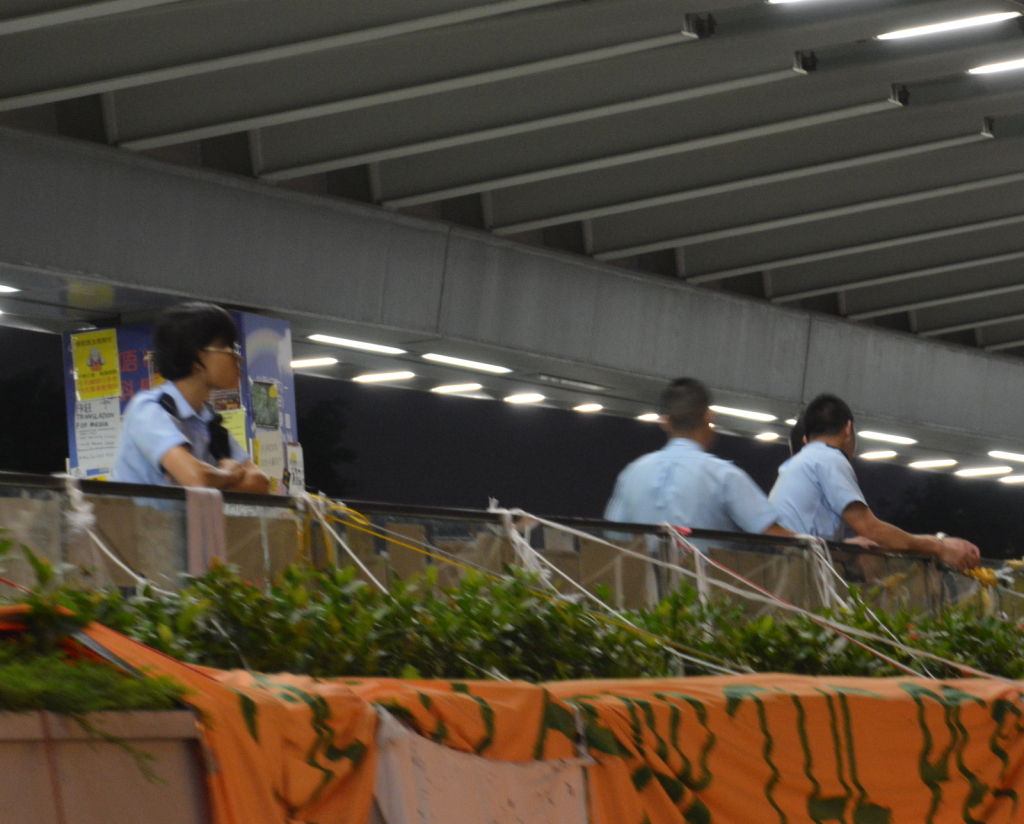 Of course many polices watching them. But here is also not tense. 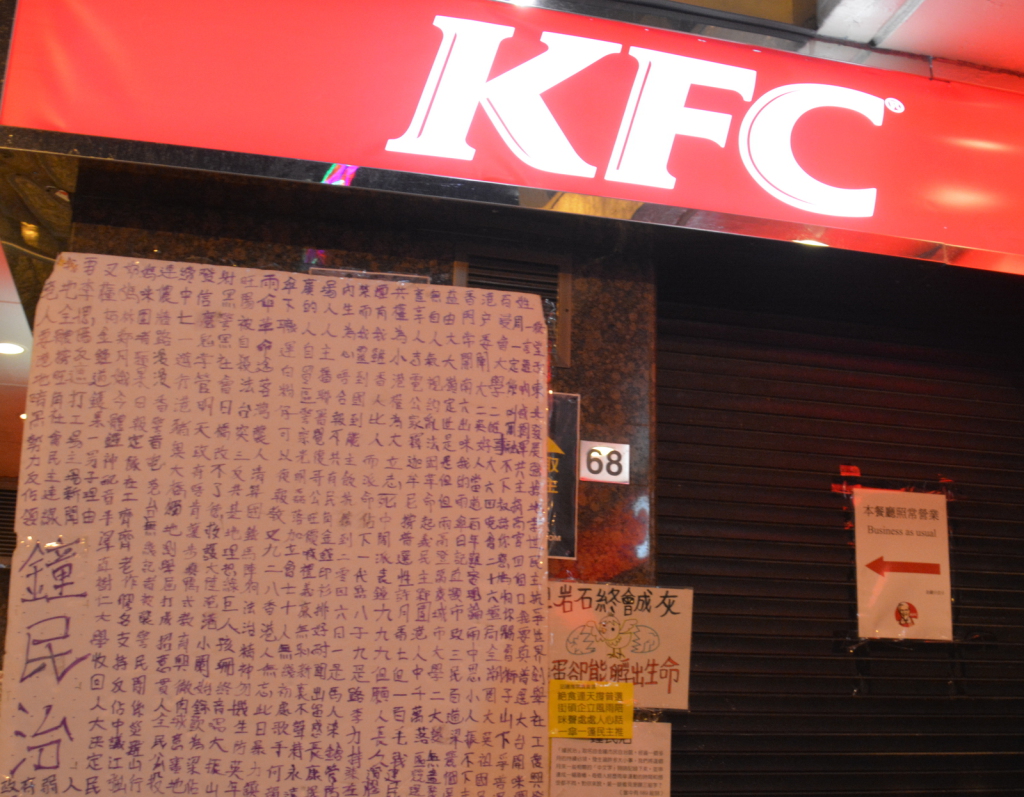 They were doing a business with effort. 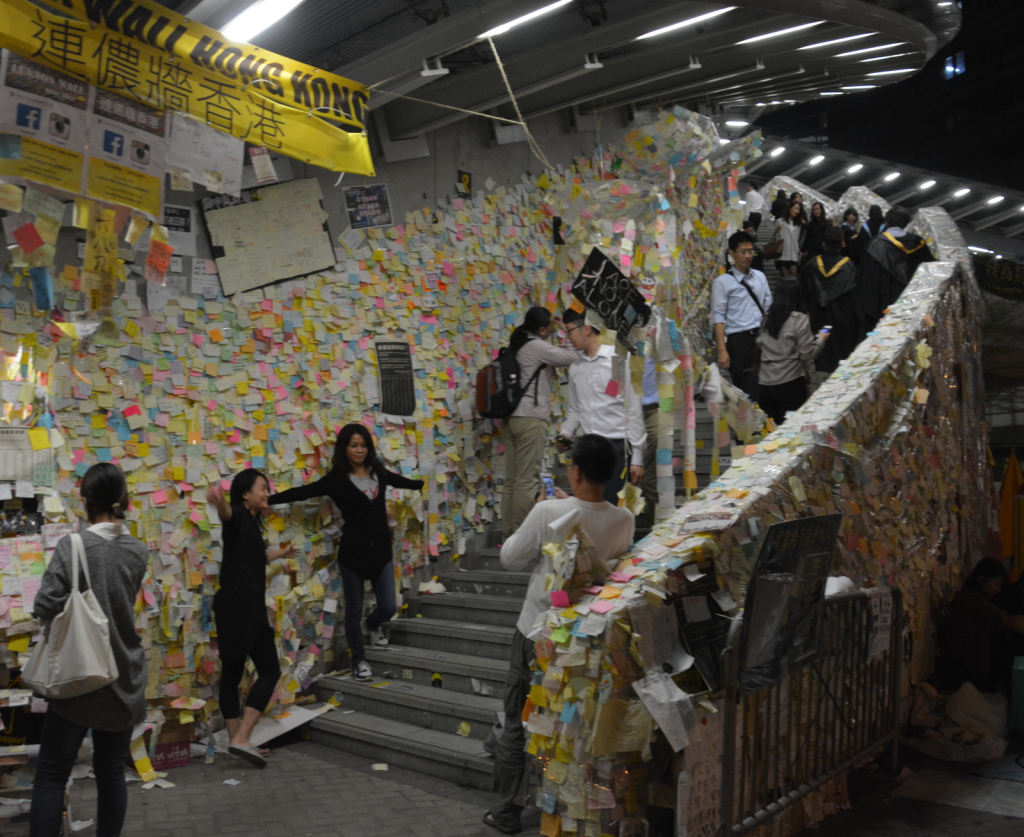 Stairway with Many Labels

Anyway, They are fighting for freedom, seriously. 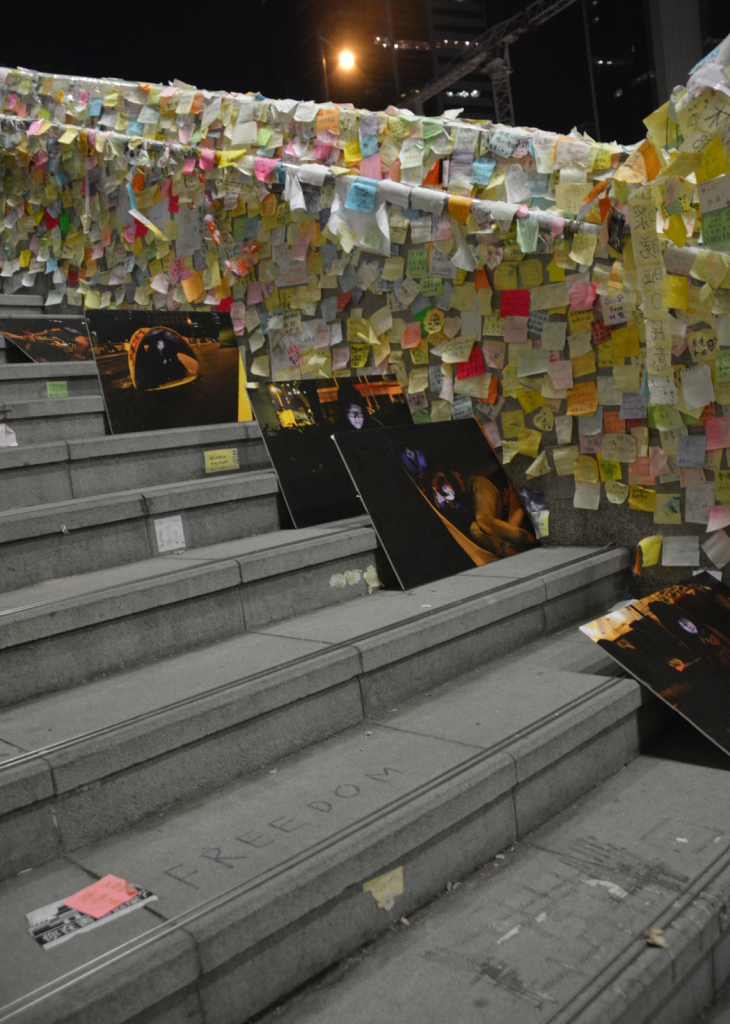